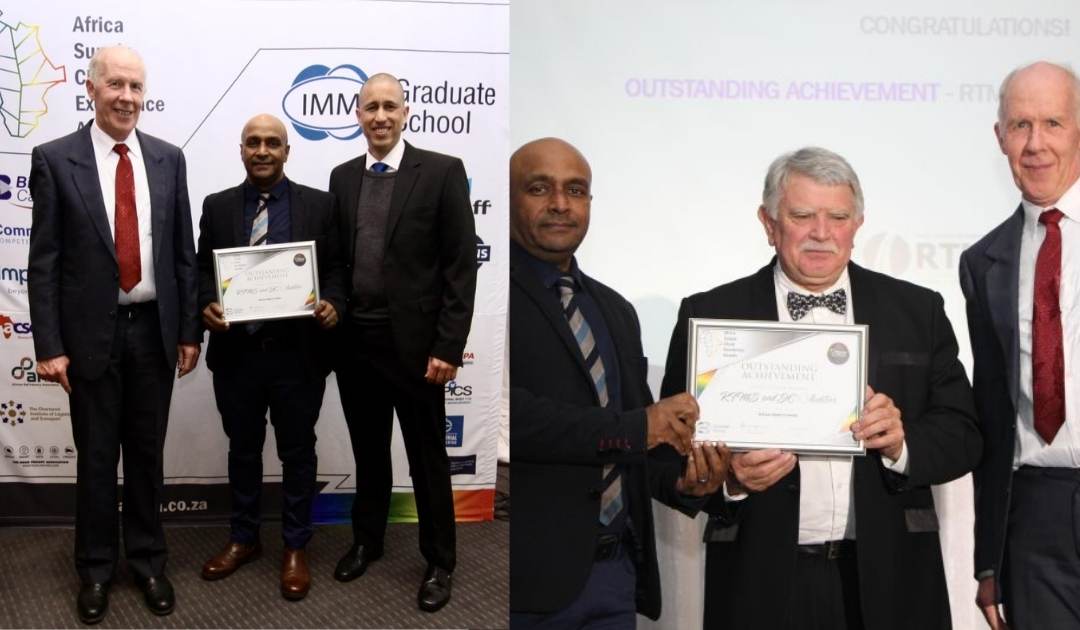 The Awards celebrate the vital role played by supply chain management and honours the achievements of organisations and individuals working in the field in Africa.

“JC Auditors is pleased to have been recognised for its role in promoting safety, compliance and efficiency”, says Managing Director Oliver Naidoo.

“We have pioneered RTMS audits and certification in South Africa, in collaboration with the RTMS NPC, which promotes the adoption of the RTMS standard in various supply chains.”

In a joint presentation to the African Supply Chain Excellence Awards, JC Auditors and the RTMS NPC highlighted the work done to increase safety and efficiency on the roads, by implementing a management system that demonstrates compliance with the Road Traffic Regulations and contributes to preserving road infrastructure.

“The RTMS aims to mitigate the consequences of heavy vehicle overloading and poor compliance to road safety,” explains Naidoo. “Even though RTMS was initially mooted as an overload control mechanism, it has evolved to a holistic system of managing road transport operations.”

JC Auditors have conducted more than 5 000 RTMS audits over the past 15 years, across various transport sectors. The audits have played an invaluable role in promoting safety, compliance and efficiency, achieving exceptional results.

These courses have had a defined impact in empowering individuals to understand the RTMS and how to implement the standard in various fleet operations. “The JC Auditors’ team of industry experts have made a significant impact in enabling the adoption of RTMS,” continues Naidoo.

In South Africa, approximately 14 000 people die each year on the roads. Heavy vehicle overloading and a culture of non-compliance have continued to present a significant challenge to the country – despite the concerted efforts of law enforcement.

Another challenge has been the high prevalence of vehicles that are not adequately maintained, while many transport operations don’t monitor key risk factors such as speeding, general driver behaviour or adequate resting time for drivers.

According to Naidoo, the failure of transport operators to implement a holistic, structured road transport management system is a root cause of the high crash rates within the heavy vehicle road transport sector. “RTMS is increasingly being adopted by the transport sector, as more benefits become evident,” adds Naidoo.

“These include a reduced number of crashes and incidents in the country, a real reduction in overloading in several sectors and overall improved driver behaviour – thanks to ongoing training, as well as improved driver health and wellness.”

Highlighting the overall greater compliance within the transport industry and the work done by JC Auditors and RTMS, Naidoo said the success of the programme was encouraging.

“Much work, however, remains to be done, as the RTMS companies still represent a very small proportion of the total number of transport companies in South Africa. Going forward, the RTMS NPC and JC Auditors will continue to look at innovative ways of expanding the RTMS to reach more transporters,” he concluded.

Listen to interview about RTMS with Oliver Naidoo on Cii Radio:

We use cookies on our website to give you the most relevant experience by remembering your preferences and repeat visits. By clicking “Accept All”, you consent to the use of ALL the cookies. However, you may visit "Cookie Settings" to provide a controlled consent.
Cookie SettingsAccept All
Manage consent

This website uses cookies to improve your experience while you navigate through the website. Out of these, the cookies that are categorized as necessary are stored on your browser as they are essential for the working of basic functionalities of the website. We also use third-party cookies that help us analyze and understand how you use this website. These cookies will be stored in your browser only with your consent. You also have the option to opt-out of these cookies. But opting out of some of these cookies may affect your browsing experience.
Necessary Always Enabled
Necessary cookies are absolutely essential for the website to function properly. These cookies ensure basic functionalities and security features of the website, anonymously.
Functional
Functional cookies help to perform certain functionalities like sharing the content of the website on social media platforms, collect feedbacks, and other third-party features.
Performance
Performance cookies are used to understand and analyze the key performance indexes of the website which helps in delivering a better user experience for the visitors.
Analytics
Analytical cookies are used to understand how visitors interact with the website. These cookies help provide information on metrics the number of visitors, bounce rate, traffic source, etc.
Advertisement
Advertisement cookies are used to provide visitors with relevant ads and marketing campaigns. These cookies track visitors across websites and collect information to provide customized ads.
Others
Other uncategorized cookies are those that are being analyzed and have not been classified into a category as yet.
SAVE & ACCEPT